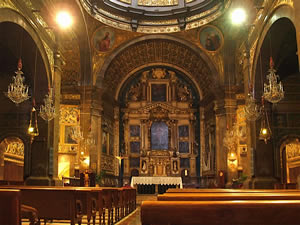 On the road from Sóller to Pollenca, just after the junction with the road from Luca and on your left hand side, you´ll find one of the major sanctuary for pilgrims on Mallorca, the monastery of Lluc.

Christendom arrived on Mallorca in the 3rd century AD. That time came to an end with the invasion and the conquest of Mallorca through, at first, the Vandals and then the Moors during the 10th and 13th century. All statues of the virgin Mary had to be burried to hide them from the invaders as they chased and killed all christians and destroyed their sanctuaries. Jaume I., King of Aragon reconquered Mallorca 1229 and with him christianity returned so churches, palaces and sanctuaries were being rebuild again.

As the story goes, a moorish boy by the name of Lluc was herding his flok of sheep when a bright light drew his attention towards a half burried statue of the virgin Mary, carved out of dark wood. He took it with him and gave it to the pastor of Escorca. The statue was gone the day after when the pastor wanted to take a closer look at it. People were astonished when they relocated the statue in the same place Lluc found it. Again they took the statue and brought it back to Escorca but again did it vanish and appeared at the same habitat. It happened again after that and everyone was sure that it had to be a sign and therefore erected a chapel; the foundation stone of the monastery Lluc.

In 1260 they began to build the monastery and even Gaudí participated in this originaly gothic construction with its magnificently decorated facade. Even today there are monks living here and  you come across them during their daily work, devotedly taking care of the beautiful park that is part of the monastery. It houses a famous comprehensive school as well as an internationaly known Choir, that because of their blue uniform is called the „Blavets“, the blue ones.

Today the monastery Lluc is a place of pilgrimage for many tourists that come here to see the holy virgin Mary. After visiting the monastery and its chapel there is the posibility to stay in the Café or the Restaurant, letting the atmosphere affect your spirit.
For all interested and adventuresome of you, it is possible to stay at the monastery over night. You can rent a monks cell and in the middle of the Tramuntana Mountains, with little to no furniture you´ll wake up to the enchanting sound of the choir.