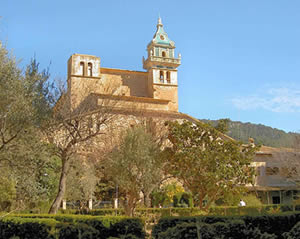 The carthusian monastery ows its high profile to two famous visitors during the winter of 1838/39: George Sand and Frédéric Chopin. They spent their famous “Winter on Mallorca” at the monastery. Originally, it was an arabic manor and the property of Vell den Munsa who gave Valldemossa its name.

Jaume II build his summer residency on that land and then, just before a change in incumbency, donated it to the carthusian monks of Tarragona which after the war, rebuild the residency and therefore their monastery. After they rebuild it, they focused on their daily work which, apart from the work on the monastery itself, was to study and to produce copies of books. Even today there are still many historical works to be found in their library. Only twelve monks were allowed in a carthusian order but in Valldemossa they made an exception and allowed a 13th monk to be part of  it. He would focus on taking care of the pharmacy. You can still get self made, traditional medicine in the monastery's pharmacy today.

George Sand and Frédéric Chopin spend their time in the monastery because of the secularism of church property that took place at that time. George Sand tried to cope with her stay on the island and some problems with the natives, by writing a book after returnig called „ A winter on Mallorca“ which became a bestseller. The cells they lived in and in which Frédéric Chopin wrote some of his most famous pieces are still there to be seen. The cells were decorated in a lovely way with some of their personal objects, old sketches and notes.

The church of the monastery with its cloister and the paved interior can be visited. It is being said that the armchair inside of the church would let a woman get married by the end of the year if she sat down on it.

Every August, the Anual Chopin-Festival is being celebrated on the monastery grounds and people from all over the world come to visit; a good oportunity for everyone and especially for those interested in classical music.